How Your Mobile Devices Affect the 21st Century Healthcare Environment

This paper debunks some of the top myths about the potential risks of infectious diseases that mobile devices present. Facts are provided to help hospital decision makers implement new policies and processes for cleaning and disinfecting the mobile devices that are used by healthcare workers throughout their facilities.

Not all that long ago, hospitals relied on pen and paper for measuring, monitoring and reporting information. Today, handheld computers and mobile devices have taken their rightful place in hospitals around the world. On a daily basis, clinicians use these powerful devices to gain instant access to a wealth of mission critical information — from real-time lab results to a change in a patient’s condition or verification of the ‘5 rights’ of medication administration at a patient’s bedside. Patient care and clinical outcomes have dramatically improved.

Along with the many important benefits these devices provide, however, come new concerns about infection control and the need to keep the devices cleaned and disinfected. On any given day in the U.S., approximately one in 25 hospital patients will have at least one healthcare-associated infection (HAI), according to the Centers for Disease Control (CDC).

The fact is that all too many patients in U.S. hospitals—about 2 million every year—fall victim to infections from superbugs, or antibiotic-resistant bacteria that can be extremely difficult and costly to treat.

Hospitals are sitting up and taking notice because, with passage of the Affordable Care Act (ACA), they are now much more accountable for HAIs. The ACA provides incentives to hospitals to reduce their readmission rates (frequently caused by HAIs). When a readmission rate exceeds a specific threshold, the hospital’s reimbursements from Medicare and state Medicaid programs can be significantly reduced.

By following standardized, evidence-based infection control practices, hospitals can significantly reduce the incidence of HAIs. Among best practices are the cleaning and disinfection of mobile healthcare equipment (e.g., wheelchairs) that comes into frequent contact with staff, patients, and visitors. That frequent contact compounds the risk of the spread of pathogens from individuals to the equipment, and vice versa.

With the implementation of electronic health records and the increased availability of mobile devices, healthcare workers now have greater, faster access to information at their fingertips at the point-of-care. A recent HIMSS survey2 found that wireless technology is being adopted faster than hospital policies, with many hospitals allowing use of devices owned by the end user. According to the survey, most physicians (69%) use mobile technologies to view patient information, with 36% using them to collect data at the bedside.

Just as with other devices that come into contact with the hands of healthcare workers, mobile devices can pose a significant risk of the spread of HAIs in patient care environments. The Journal of Hospital Infection raised this concern as early as 2009, stating that “bacterial contamination of mobile communication devices could be an important issue affecting the implementation of effective infection control measures and might have an impact on efforts to reduce cross-contamination.”

This paper addresses six of the top myths about the potential risks that mobile devices present in healthcare environments. Facts are presented to help hospital decision makers implement new policies and processes for cleaning and disinfecting mobile devices used by healthcare workers throughout their facilities.

Facts: Mobile computers, scanners, printers, and mobile phones are all a fact of life in hospitals. Because of their constant contact with the hands, faces, and ears of healthcare workers throughout the day, their screens inevitably become filled with multiple bacteria. Mobile phones in particular—because of the heat generated by their batteries and the fact that they are often stored in dark, warm places like pockets—act as breeding grounds for bacteria. A typical mobile phone has 18 times more harmful bacteria than a handle in a public restroom.

Another study of the mobile phones of healthcare workers published in HealthMed6 demonstrated that more than 70% of the phones were contaminated by various types of bacteria, with 16.7% carrying bacterial known to cause nosocomial infections.

While the importance of using hand sanitizers to prevent the spread of bacteria is well recognized, the establishment of practices and protocols for cleaning and disinfecting mobile devices is not as widespread at U.S. hospitals.

The fact is that if mobile devices, such as printers and scanners, are not properly cleaned and/or disinfected after every bedside patient interaction, there is a risk of the device carrying potentially deadly bacteria and that chain of infection from a patient carrying a deadly pathogen puts other patients and staff at risk.

Reality: The surprising truth is that healthcare workers are not washing their hands as much as they should. In fact, the handwashing compliance rate at many hospitals is as low as 30% of the time that they interact with patients.

Facts: The practice of hand hygiene is widely recognized as an important first defense against HAIs in hospitals. Healthcare workers who come into contact with patients are expected to perform handwashing multiple times throughout each patient interaction. The CDC and the World Health Organization (WHO) consider inadequate hand hygiene to be one of the most important contributors to infections. The WHO provides guidelines for situations in which healthcare is delivered to a patient.

Unfortunately, the low rates of handwashing compliance at U.S. hospitals are creating scenarios in which mobile devices become fomites, or objects that can transmit disease. 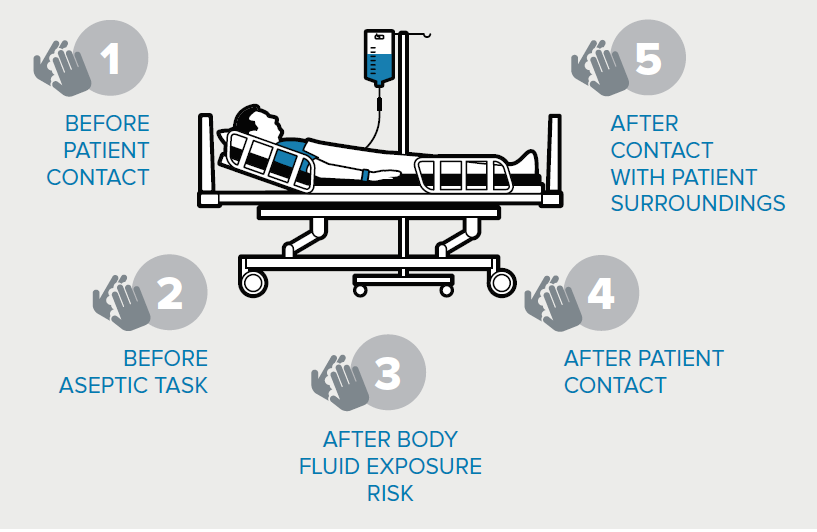 Myth: Wiping a mobile device with a microfiber cloth will clean and disinfect the device.

Reality: Cleaning and disinfecting are two different processes and usually involve two different steps. Optimum results can often be achieved through the use of a “best-in-class” microfiber cloth.

Facts: Even when a mobile device is cleaned of fingerprints, the surface of the device may still be covered with potentially harmful bacteria. Alternatively, even when a device has been disinfected, it may not necessarily be clean.

While the terms “cleaning” and “disinfection” are often used interchangeably, they have significantly different definitions. According to the CDC, cleaning is “the process by which foreign material such as dirt and grime are removed from the surface of an object.” Regular cleaning of a device by wiping with a moist microfiber cloth is often enough to eliminate many kinds of bacteria. An additional level of decontamination is often needed to remove more dangerous and long-lasting bacteria. The process of disinfection is needed for maximizing the elimination of bacteria.

The CDC defines disinfection as “the use of a chemical procedure that eliminates virtually all recognized pathogenic microorganisms but not necessarily all microbial forms (e.g., bacterial endospores) on inanimate objects.10 For proper disinfection—and to alleviate the risk of leaving harmful bacteria on the device surface—it is important to follow the directions provided on the agent that is used for the disinfection process.

According to the CDC, after a device has been disinfected at the beginning of a workday, a good rule of thumb—or ratio for cleaning vs. disinfection of enterprise mobile devices—is 5-to-1. In other words, a device should be disinfected after it has been cleaned with a microfiber cloth five times.

Myth: The mobile phones used by hospital patients and their visitors do not pose a risk factor for spreading HAIs.

Reality: The mobile phones of patients and visitors are actually twice as likely to contain potentially dangerous bacteria as those of healthcare workers.

Facts: While no definitive link has been identified between patient and/or visitor mobile phones and HAIs, a recent study published in the American Journal of Infection Control11 presented disturbing results from tests on 200 mobile phones, 133 of which belonged to patients and their visitors and 67 mobile phones of healthcare workers.

The swab samples that were collected showed that approximately 40% of the visitor and patient phones contained disease-causing bacteria, compared with only 20% of the healthcare staff phones. In addition, seven patient phones were found to contain multidrug-resistant (MDR) pathogens such as methicillin-resistant Staphylococcus aureus (MRSA) and multiply-resistant gram-negative organisms. None of the staff phones tested positive for MDR pathogens.

These eye-opening findings led the leaders of the study to conclude that the mobile phones of patients and their visitors represent a distinctly “higher risk for nosocomial pathogen colonization than those carried by healthcare workers and that specific infection control measures may be required for this threat.”

Myth: Scheduling the cleaning and disinfection of mobile devices should be the same throughout all areas of the hospital.

Reality: The frequency of cleaning mobile devices depends on the type of items and where they are located in the facility.

Facts: The way each mobile device is used and the locations in which it is used should determine the schedule for cleaning and disinfection. Disinfection of devices that are used in patient rooms, for example, in which most of the interactions between healthcare workers and patients occur, should be much more frequent than in other locations of the hospital.

Hospital laboratories, on the other hand, which work with patient specimens that contain what OSHA considers blood borne pathogens, are controlled environments that already have very strict guidelines in place for cleaning and disinfection of equipment. Therefore, there are fewer variables and risk of cross-contamination. ICUs, cardiac care units, and isolated patient rooms have similar prescribed workflow demands.

Reality: Not all mobile devices are durable enough to stand up to frequent rigorous cleaning and disinfection.

Facts: Frequent cleaning and disinfection of mobile devices are important steps in the prevention of the spread of bacteria among patients and caregivers. There are many cleaning solutions that can be used to clean mobile devices, but many of the chemicals in these solutions can have a harsh effect on the molded plastic on devices—causing cracks and breaks in the material.

For a mobile device to meet a hospital’s infection control policies, it should have adequate ingress protection (IP) sealing in order to prevent the chemical cleaning solutions from entering and damaging the device. The outer plastic on the device must be sturdy enough to withstand exposure to these harsh chemicals.

What This Means For Hospitals

Clearly, there is a need to raise awareness among hospital administrators and healthcare workers about the risk of infection that is inherent in the use of both consumer-grade and enterprise mobile devices in hospitals—and to develop policies and procedures for the regular cleaning and disinfection of those devices. There is also a need to raise awareness about—and monitor compliance with—hand hygiene policies.

According to the CDC’s Guidelines for Disinfection and Sterilization in Healthcare Facilities, mobile devices are considered “noncritical items” that “come in contact with intact skin but not mucous membranes” for which the agency recommends the use of an EPA-registered disinfectant.

Although there are currently no specific published standards for cleaning and disinfecting mobile devices. Hospitals must put formal protocols in place that clearly outline responsibilities, timing, and procedures. Regular education and training programs should be conducted and best practices established along with monitoring programs for compliance. Incorporating the use of mobile devices into a comprehensive program will allow healthcare professionals to take advantage of the many benefits they bring to patient care without compromising patient and worker safety.